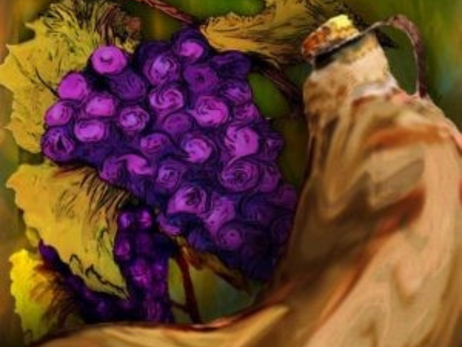 Matt 9:14    Mk 2:18   Luke 5:33
The Pharisees criticize Jesus because he enjoys Himself whereas ‘truly religious people’ like John Baptist, for example, fast, pray, and preach dreary sermons about sin and the degraded nature of humanity and God’s coming vengeance.  Whereas all Jesus does is wander around telling wonderful stories, healing the sick, eating and drinking with ‘not religious’ people and generally making people feel glad to be alive. And He claims to have a very special kind of relationship to God!  This sums up the profound difference between the spirituality of Jesus and religion generally.  This is the new wine, the new cloth that He speaks of in this text.  The old religious forms, which cannot accommodate the new, reside in a view of God that is far from that of a loving parent.  The god who underpins the prohibitions of enjoyment has been around for a very long time and the great pity is that he is so prevalent in Christian teaching.  In spite of Jesus teaching the new loving, happy way of understanding the deity, from very early on the pressure of ‘the old cloth’ view that fun, delight, laughter, and definitely sex, were suspect activities that must be treated with the greatest of circumspection.

There’s a famous morning hymn by John Keble (d1866) a man whose ”  beauty of life impressed all who came in contact with him”, which sums up in a gentle but determined way this very curious doctrine:
Like so many hymns, it goes to a catchy tune that we can easily sing but when one looks at the words and their implications it is appalling.  Clearly it suggests that God provides all the wonders of creation for the sole purpose of seeing if we can resist the temptation to enjoy them.  That’s like giving a kid a Christmas present and as soon as s/he has gasped with joy at receiving it you take it away because the experience of renunciation is good for his development! Furthermore, the words declare that it is by self-denial that we come closer to God.

This whole chronic self-denial thing has a very long history and the more I think about it the more sad I get. People like St Jerome, who has such a ‘good press’, was terminally dreary and had a rotten time in his own mind between his natural God given inclinations and his belief in the need to torture himself as a means of grace.  It is men like this who shaped the faith and somehow managed to make the loveliness of Jesus conform to their own ideas of piety, which He didn’t! I prefer Dom Sebastian Moore’s idea of God enjoying himself and wanting us to join in.

But is it only religion that does this dreariness number?  Medical science is pretty good at it too.  How much ‘information’ are we exposed to on television about the dangers of the things we enjoy and with which we celebrate life, love, friendship ‘or even a very good dinner’?  I heard someone recently say ‘Everything we enjoy becomes an addiction’.  He didn’t mean that as a recommendation to abstinence but rather it was an ironic comment.  He was talking about coffee at the time, citing the many research papers extolling the benefits of coffee, but how it is demonized (because we enjoy it).
One of the most frightening waves that has swept over Western society is the diminution of many of the various forms there used to be for people to enjoy themselves with other convivial people.  It is as though conviviality itself has become suspect.  The present plague situation has of course exacerbated the problem, but didn’t cause it.  Has the closure of so many pubs or the ‘criminalizing’ of smoking made anyone happier or decreased disease, depression or domestic violence?  That’s a very good question and to ask it does not mean being negligent about things which may prove fatal but it does suggest that there may be other ways we need to think about solving the problems than creating situations which isolate, deprive, disparage and bore people into sickness and early death.
Read further articles in this special release series:
See The Complete Series