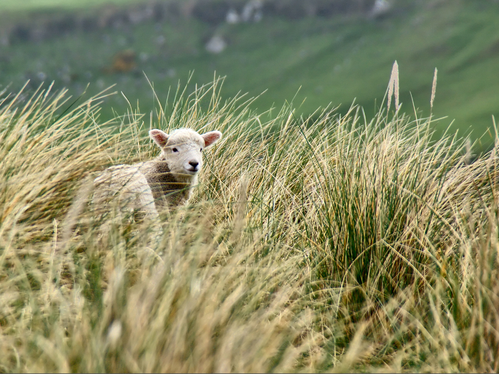 Luke 15:4    Matthew 25:1
There is a reciprocity between historic cultural norms and the expression of the same in Christian teaching, though the cultural norms go back to the beginning of time, or if you like, back to Eden! Because they have been normalized for so very long, we don’t notice the fearful anomalies that never get set side by side, nor questioned. The evolution of human consciousness being what it is this is not surprising nor is it something to grunge on about but it is fun at the present time to give the bible stories a new twist.

Would you rather be a lost sheep or a foolish virgin?  On the one hand you would get sought after, lifted up by a loving Master and be brought home to great rejoicing; on the other, while there is great rejoicing going on inside, the door is slammed in your face and you are virtually told to bugger off.

Bad sheep, silly sheep, sheep are meant to stay together and each do what the others do. That’s what it means to be a sheep. The one who strays from the common herd, though a dangerous thing to do, will be looked for even if it takes all night.  When found he will be brought back into the fold and encouraged not to go off on his own track again.

Virgins on the other hand are supposed to be thoughtful, prepared for any emergency, to think for themselves and make sure that their light shines brightly.  If they don’t there is no help for them. No-one is going to make sure that they are safe and no-one gives a toss about their fate.

Two lessons we take from these two stories can be summed up:
Lesson One:  It is not a good idea to be an individual and go off exploring on your own but if you do your needs will be understood and you will be gently brought back to the collective way.  There is no gender specified for the sheep, rather it is the staying safely in the fold that is significant.

Lesson Two If you are a woman, you must do what is expected of you or there is no hope for you.

What might these lamps signify? What makes a young woman go forward brightly and confidently in the world?  Clearly, a sense of being of value, having self-worth, self-esteem, self-confidence, call it what you will it is an inner flame that lights her way.  We know that that light does not come from an ego decision but from the experience of love.  So, the fortunate end of the Happy Virgin is the result of a happy beginning.  Conversely the Rejected Virgins are doomed from the beginning.  They have no resources to keep their lamps even flickering and their attempts to find what they lack are futile.  Jesus said “To those who have more will be given and to those who lack even what they have will be taken away”.  Not a statement of judgement, perhaps but a statement of fact.

This is a truly terrible story from a present-day perspective.  Granted comparatively few people now read, hear or think about these things but the biblical teachings form a significant layer in the bedrock of collective consciousness and have validated cultural attitudes down the generations.  Dusting them off and having a fresh look at them could serve us well.

As for the poor Rejected Virgins, Hafez, a lovely Persian poet of the 14th century has a word for them:
If one comes to this story symbolically there is a wonderfully positive side to it. The foolish virgins are turned away, but from what are they dismissed? Supporting the bride at a formal, patriarchal marriage, the implications of which are, agreement with the procedure and more importantly, being available to the possibility of following in the bride’s footsteps to find (or have found for them) a husband? Maybe NOT going in is their salvation.  They are adrift to make their own decisions.  They can walk away and find, instead of a husband, themselves, or not.

But about the Foolish Virgins I am, of course, being fanciful because in reality these women would most likely have been rejected by their families, have no means of support and in be every way bereft. My interpretation is symbolic rather than natural. Even sixty years ago an unmarried woman in Western society, who was above the poverty line, was pitied, often shamed and frequently became the family drudge; not ‘doing the right thing’, not having a husband and family of her own she was bound to make herself useful for those that did and so earn her keep.  Below the poverty line her fate would have been much as it has been for poor women from New Testament times onwards even to the present day, in some parts of the world.  The concept of equality as a cultural norm does not yet cover the globe.

The Foolish Virgins have been shut out, they are on their own, they are no longer acceptable, obedient daughters of the patriarchy.  Who are they? Do they know?  A woman has to learn to be herself because the cultural norm of being a possession, of having no rights, are deep and strong.  Many women, below the level of daytime consciousness, secretly hold to the knowledge that they have to earn their place on the planet. We have achieved a great deal in changing attitudes and in material reality but the deep psychological implications of historic forms are difficult to name or to relinquish, because they are hardly seen and rarely recognized. That a woman might entirely please herself independently, have a career, have several lovers, have children without marrying. prefer to live without men intimately in their lives, etc. etc. these choices are very recent accomplishments for women in the Western world.

And there is still the question of what is a virgin, foolish or otherwise?

It seems that my work, retreats, writing etc. is and always has been designed for and directed to assisting in the lamp trimming for foolish virgins of any age, creed or gender.  My second book was originally entitled Even Unto Virgins.  This was ironic, it was a quote from an ancient prayer, from the Monastic Diurnal:  O God who among other miracles of thy power has bestowed the victory of martyrdom even unto virgins.  The same missal has a special section of prayers for women who were not virgins!  Some time I am going to write on what Harry Williams called ‘the ecclesiastical obsession with virgins.’
Read further articles in this special release series:
See The Complete Series