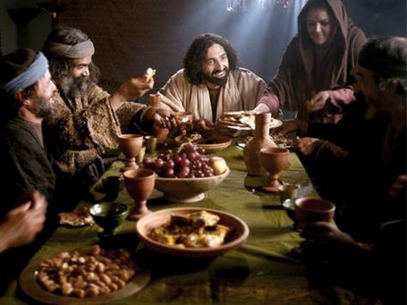 One of my very most favourite writers on spiritual matters believed and promoted the idea, so unusual in Christian writings, that God was enjoying Himself and wanted us to join in, and the man who said that was a member of the most venerable of Religious Orders! This is a far remove from the Middle Ages when it was thought heresy to suggest that Jesus might have laughed. Down the years that rather gloomy picture of God Incarnate caught on so the traditional teaching of the Gospel erased any idea of jollity from the image of Jesus.  It all became somewhat earnest to the point of being glum, especially with the onset of the Reformation. It’s too boring.  No wonder people stay away from Christianity in droves.  I am entranced with the idea of shaking up His original teachings, (as far as we can grasp them), stirring things around and seeing what deliciousness we can come up with.  The basic ingredients are there, it all depends on how you mix them!

When reading the gospels, we have to bear in mind that they were written as teaching texts to proselytise and to encourage the faithful to be virtuous, kind, careful, loving etc. as proof of the validity, truth and benefit of following in the steps of Christ.  The texts don’t serve the same purpose today and we do not do them a favour by acting or preaching as though they do.  Changing the attitude with which we come to the texts, ’opening our fettered minds’, is the first step to breathing new life into them and, one might hope, into the church to which they belong.

One of the undeniable glories of the Gospels is that every generation of Christians can seek, and find in them a Jesus who makes sense for their time.  Perhaps the genius of the gospel writers is demonstrated in this, that such seeking can, with all its variety, be satisfied.  In the present time many actively Christian people need to believe in a truly human Jesus.  For many Has-beens, the otherworldliness of Jesus, as presented, has been a major component in their withdrawal.  The heavenly Jesus, seated on the right hand of God, is, for many people, supreme only in irrelevance. (By Has-beens I mean people who have grown-up as Christians but have given up church, the faith, or both)

Two thousand years of teaching, covering an endless and changing variety of beliefs, needs and circumstances have solidified into this seemingly irrelevant and distant figure.  His words and their ‘meaning’ have likewise suffered and seem to have little to say to us.  What is often forgotten is that the Jesus of the churches and the Jesus of the Gospels are very far apart.  The church Jesus (from whichever branch of Christianity one looks) is a creation of centuries of interpretation.  It cannot be otherwise.  What interests me is finding some new, equally valid interpretations that turn the old familiar ones on their heads, bring a new flavour to the stories and so reconnect to the genuine delights to be found in the teaching of Jesus.

This attempt at peeling away centuries of teaching is rather like the restoration done on Leonardo’s Last Supper.   Behind all the tackiness there lay something more exquisite and beautiful than onlookers had ever imagined.   No way am I claiming to present ‘the real Jesus’ I am simply looking at His words with new eyes, a woman’s eyes, and seeing possibilities in the symbols that can, I hope, show a more attractive and appealing figure who seems to me to have enjoyed His life, and wanted others to do the same. Emphasizing His conviviality is a good example of the diversity I am working at.  The Jesus of the teaching sets Him up as being wonderful and gracious, demeaning Himself by spending time with sinners and ‘dead-beats’, whereas I wonder if perhaps it simply wasn’t more fun.  Given the earnestness of the overtly religious people it was a relief to spend time with ‘ordinary’ people who were trying to get on with life in whatever way they could and have some enjoyment on the way through

Behind the familiar pictures of Jesus there lie glimpses of His life as seen through the eyes of those who were close to Him in His earthly life.  These early impressions, which are embedded in the finished texts, are of the Jesus who walked and talked with His friends and shared their life.  They loved Him, even though they could never quite understand Him and were constantly astounded by His teaching and by His power.  In these first attempts at definition, the disciples were struggling to find adequate images to convey the wonder and the joy of His presence.  These are images of Jesus which are prior to the Incarnational theology of the Creeds and the centuries of interpretation attuned to the needs of different ages.

Some of the best bits of His teaching to play with are the bits that seemed most to have puzzled His mates.  It is like they are sure He said it, they didn’t get it but didn’t want to leave it out.  Now maybe that is pure invention on my part, my way of reading the texts, but in defense of my view I’d have to say these are just the texts that rarely get used for sermons and if they are, they get ‘spiritualised’ out of all recognition.  For example, He said “Ask and it shall be given to you” Now that is a very hard thing to grasp (though many modern, serious thinkers are saying much the same, with the “Universe” rather than God being the Source of the benefit). What He didn’t say was “Ask and if you are very good and if the Heavenly Father thinks it is good for you and if it is a truly spiritual request, you may have to wait, but you will receive” Of course we don’t know what this saying meant to His original audience but it is really interesting to ponder it in the light of modern quantum research, setting aside religiosity, which only confuses the issue.

Interpretation of the texts is only ever partial and provisional, always bearing the imprint of the interpreter’s conscious intent and unconscious biases.  They are not invalid on that account.  Each generation seeks to restore aspects of the gospel which addresses the need of their time. For example, the biases of patriarchal attitudes, which are inevitable given the times and places in which the texts were constructed, have to be balanced in the present if the stories are to make any sense. And that means more than a few pronouns being replaced.

This present attempt is to find in the early records of Jesus things that are interesting, enlivening, amusing, delightful, maybe even comforting; things which have an immediacy; a Jesus closer to the Earth than the Exalted Lord of later definitions.  The allusive, poetic quality of the texts actually speak with a different voice to the voice of doctrinal definition.   I want to play with possibilities.   Having opened this introduction alluding to famous cocktails it seems appropriate to begin my short Gospel reflections with the sayings of Jesus about new wine and old wine skins.
Read further articles in this special release series:
See The Complete Series